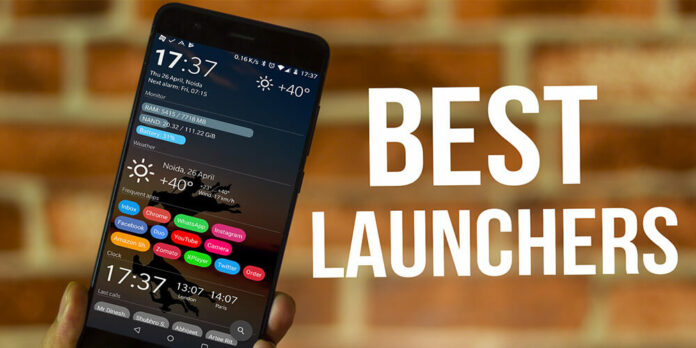 Launcher apps for Android have long been an important component of the Android experience. If you don’t like how your home screens appear or function, you can simply download an app to modify everything. Android launcher apps, without a doubt, have a far more extensive collection of capabilities than any other type of app, and you can do some incredible things with them. It might be anything as simple as Google’s Android or something as complex as Niagara Launcher. Right now, these are the best Android launchers!

The Google Pixel Launcher would be on our list. It is, however, limited to Pixel smartphones.
Those looking for something else might also try Win-X Launcher (Google Play). It’s a cross between a Windows PC emulator and something completely new.

Our readers’ favourite Android launcher, Action Launcher, has been around for a long time.
It has a vanilla Android feel to it. However, there are a few more characteristics that make it stand out. Quicktheme allows you to change the colours of your UI based on the wallpaper you’re using. Shutters allows you to preview an app’s widget without having to add it to your home screen. It even has theming and customisation features to make your phone feel more Android Oreo-like. There’s also support for icon packs, regular updates, and a lot more.
This one has a lot going for it. Even the app drawer may be customised. 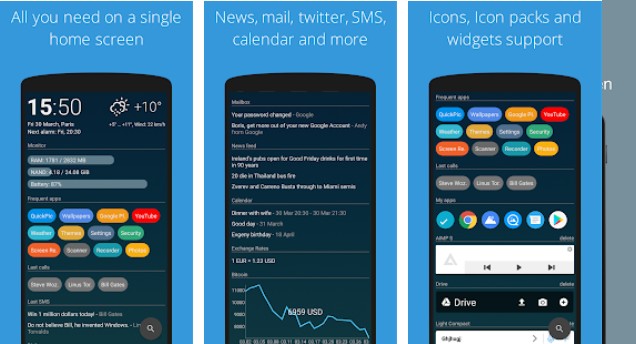 Many Android launcher apps do it differently than AIO Launcher. It does away with the traditional home screen in favour of a long list of information. It displays information such as your most recent SMS and missed calls, your media player, system information (RAM, battery, storage, and so on), as well as news, Bitcoin price, Twitter, and more. Telegram integration and normal widgets from other apps are included in the subscription edition.
Everything doesn’t have to look like standard Android, and AIO Launcher proves that it can be done well. The majority of the features are free. The complete version is available for $1.99.

Apex Launcher has been around for quite some time and is still one of the most well-known Android launcher apps. It strives to deliver a stock Android appearance and feel with a few extra features thrown in for good measure, similar to Action Launcher. You can change things like transition animations and scrolling habits, and there’s even a scrolling dock where you can arrange a lot of icons. Apex Launcher also has a theme engine built in. In 2018, the app underwent significant updates. It now appears to be much more contemporary.

If you enjoy a lot of customising, APUS Launcher is a great app to try. It includes over 50,000 wallpapers as well as a plethora of additional themes. A news feed, the option to hide apps from the app drawer, a built-in app lock mechanism, and a few other niceties are among the other features. It isn’t as light or efficient as Pixel Launcher-style launchers such as Nova Launcher, Hyperion, Lawnchair, and others. It is, however, far more colourful and flashy. That is how some people prefer it. The launcher is ad-supported and free. The fact that you can’t buy the app to remove adverts is our only serious gripe. 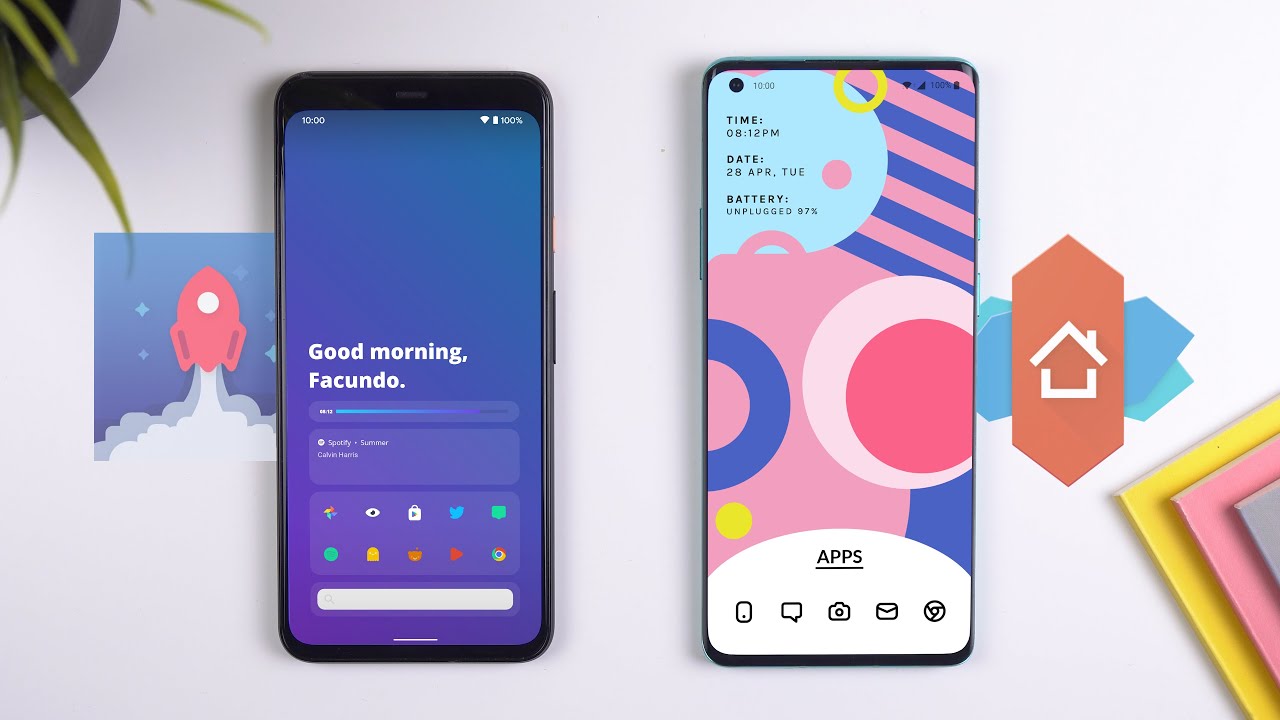 Hyperion Launcher is a relatively new Android launcher. It sits comfortably between bulkier launchers like Action and Nova and Lawnchair’s basic Android experience. The user interface is plain and simple, with little bloat or flair. However, there are numerous customising options.
Third-party icon compatibility, an icon shape changer, theming components, and other cool features are included. It supports Google Feed, but, like most other launchers, it requires a separate download. Although it is new, it has quickly established itself as one of the best Android launchers. 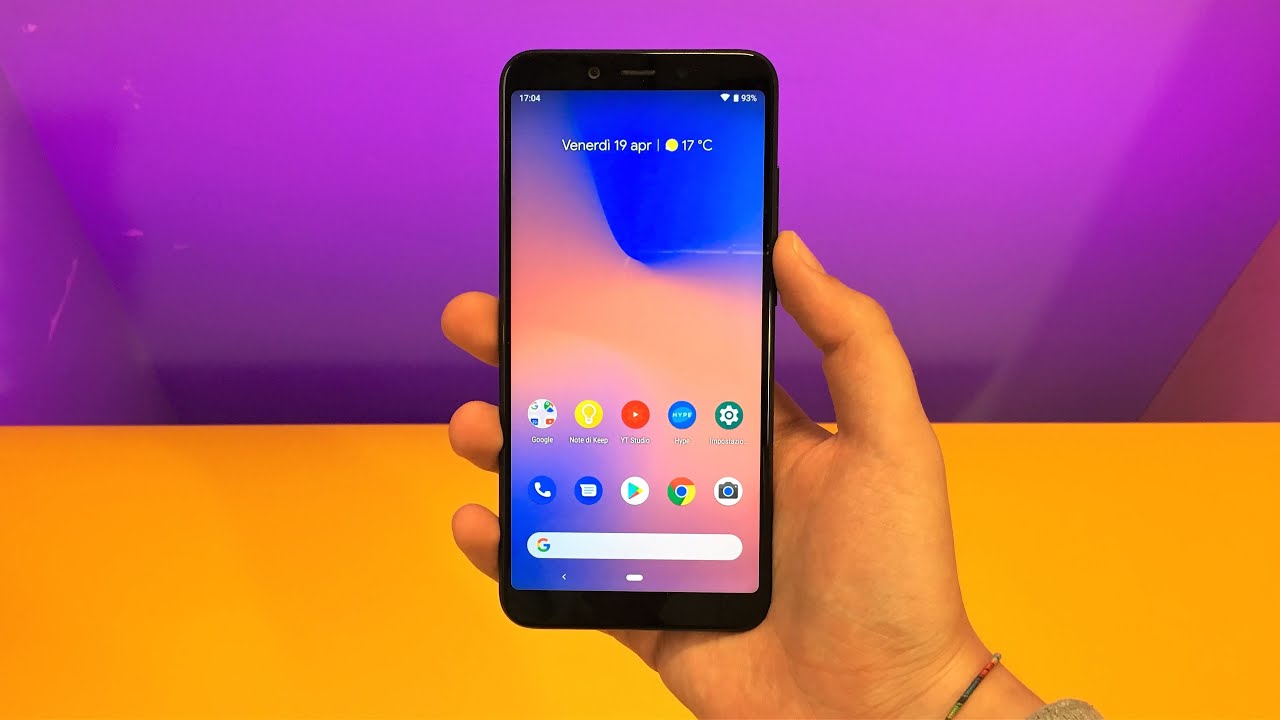 For minimalists, Lawnchair Launcher is an amazing Android launcher. It’s an open source project that looks and feels similar to the Pixel Launcher. It has many of the same features as the Pixel Launcher, as well as a few more. Icon pack support, Google Now integration (with an optional and free plugin), adaptable icons, and several additional customizations are among the features. The original was praised for its stock-like appearance as well as its customizability options. Lawnchair 2 is the new name for the app, which is still in development but incorporates several more current Android features. In addition, the software is completely free. 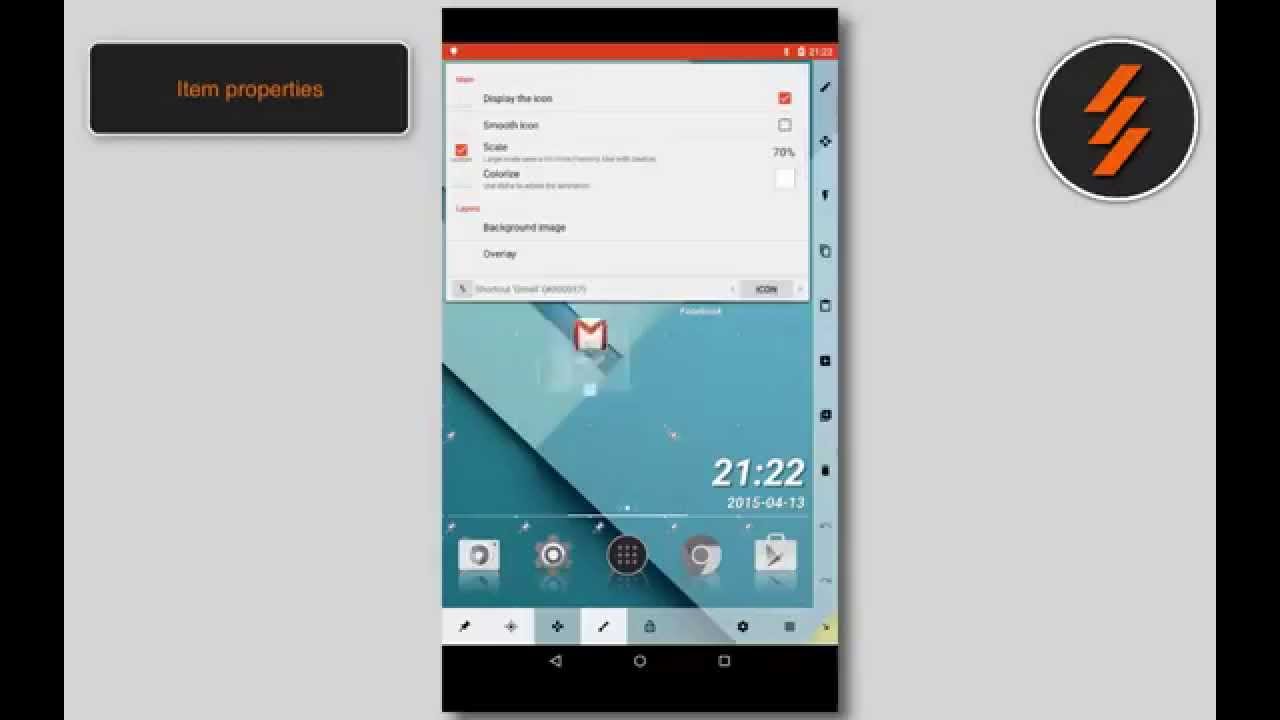 Lightning Launcher was formerly a good, minimalist Android launcher. Since then, it’s become one of the most customisable Android launchers ever. It’s also still really light. It allows you to customise the home screen in a variety of ways. It’s even possible to have various sets of home screens for different circumstances. Its scripting support is perhaps its most unique feature. You can make Lightning perform a lot of different things with JavaScript. Additional plugins, language packs, and other items are also available for download. The feature list isn’t particularly big, but it appears to check all the appropriate boxes. The app has a learning curve as well, but it’s well worth the effort. 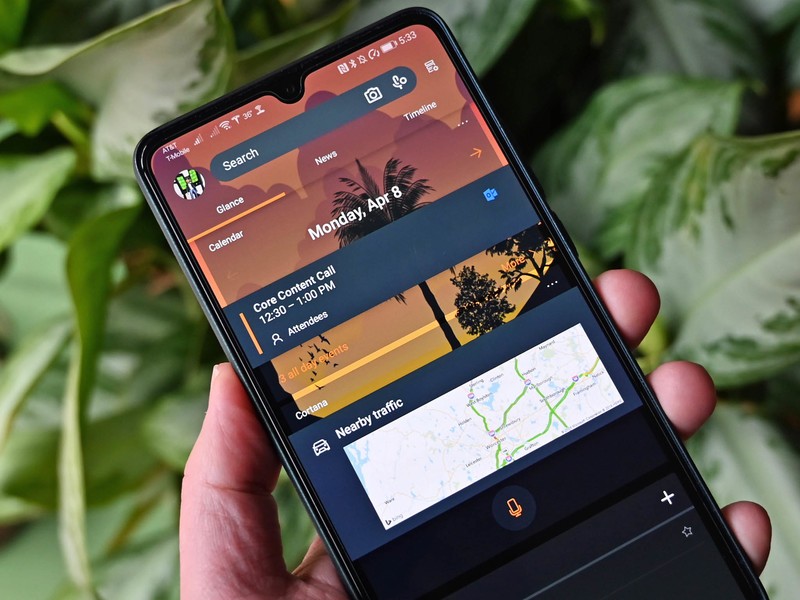 Microsoft Launcher isn’t a brand-new app. Arrow Launcher was the previous app. In mid-2017, Microsoft renamed the app. Many Microsoft services are integrated within the app, including their calendar, email, to-do list app, and direct interaction with Microsoft PCs.
It also provides gesture controls and customization options. After the rebrand, this one went back into beta. As a result, there are most certainly some issues for the time being. It is, nonetheless, unique and particularly valuable for individuals who seek a better interface with their Windows PC. This app is being rebuilt from the ground up by Microsoft. When that new version is officially issued, it will most likely replace this version on this list. Niagara Launcher is the newest launcher app on the list, and it’s a bit of a hidden gem. It has a clean, minimalist UI with good ergonomics and a beautiful appearance. With integrated message notifications and audio controls, the app also seeks to reduce the need for the notification shade. Along with fundamental features like icon pack support, there are some light theming options available. The stable version was released in February 2021, with a number of bug fixes and small design modifications. It’s obviously and easily excellent enough to be here, especially if you’re looking for something different than the standard Android launcher. 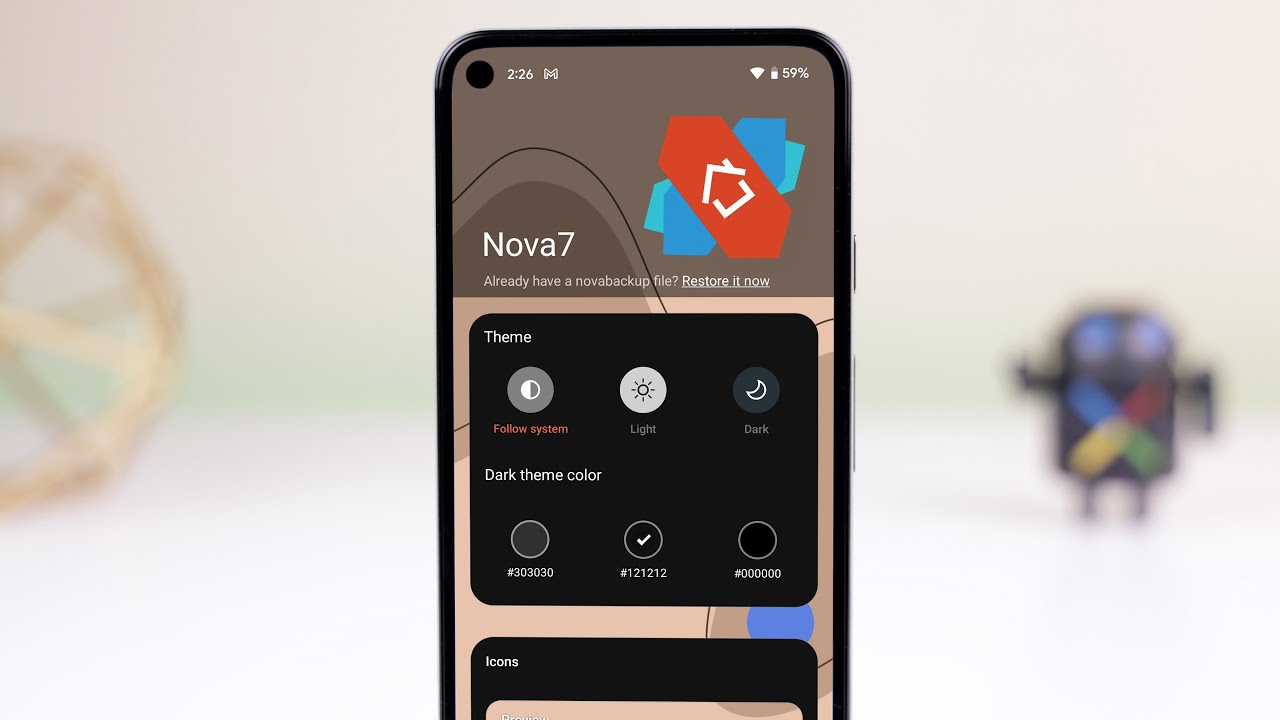 Nova Launcher is one of the best launchers available. Nova, like Apex Launcher, has been around since the beginning. It’s not just relevant, but it’s also one of the best Android launcher apps out there. It comes with a long variety of customization options, including gesture support, the ability to change the app’s appearance and feel, icon pack compatibility, themes, and much more. The software is also updated at a breakneck speed, which means issues are generally squashed swiftly and new features are added on a regular basis. It also allows you to backup and restore your home screen layouts in case you transfer phones in the future. It’s the one we recommend starting with. 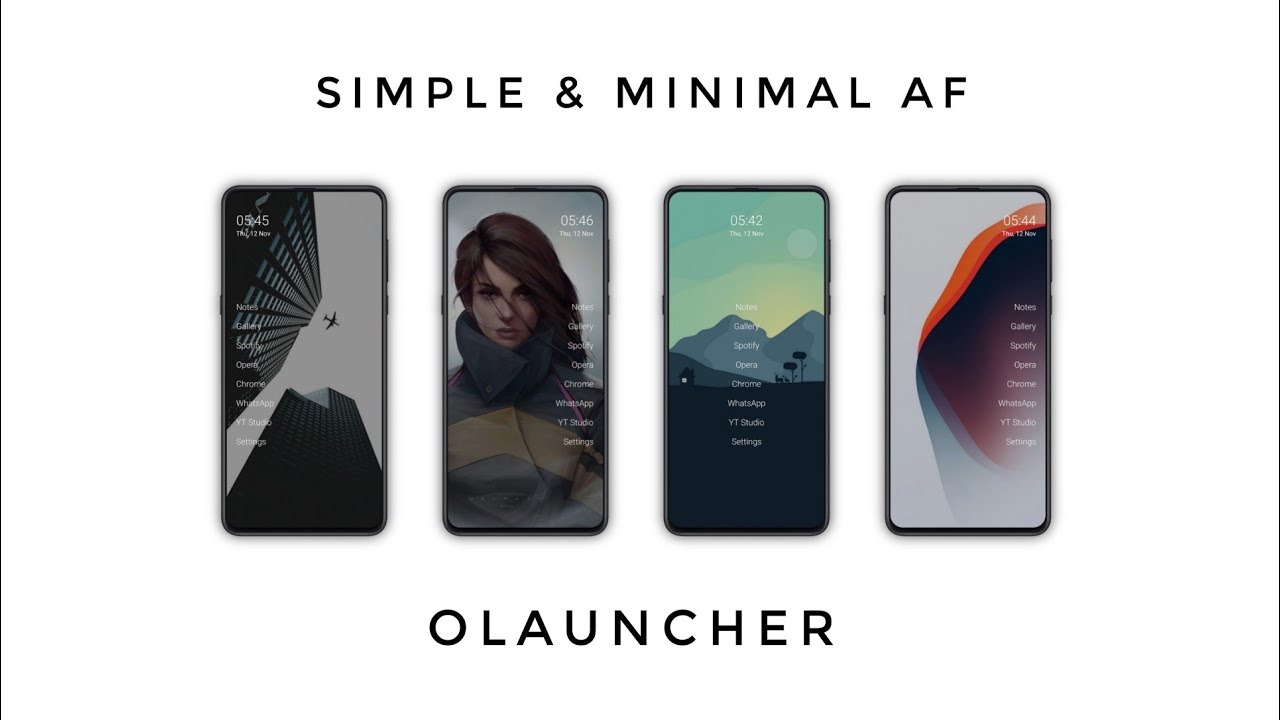 On this list, Olauncher is one of the newer Android launcher apps. It has a simple user interface, few modification options, and is easy to use. To keep the experience as simple as possible, the programme omits popular graphical components like icons. You can change the wallpaper and make a few tweaks, but that’s about it. It’s simple to set up and operate, and it doesn’t get in the way. The software is still being developed, so new features are being added all the time. Still, it’s one of the better minimalist style launchers I’ve seen in a long time. 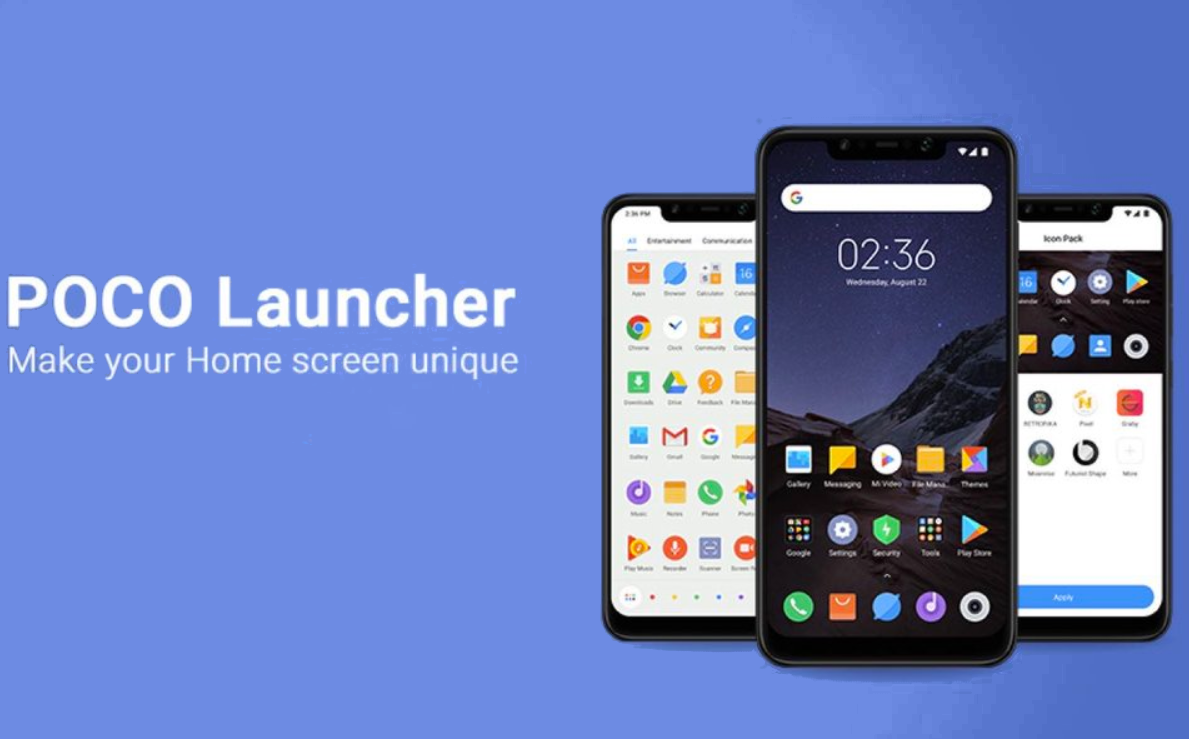 Poco Launcher is the default launcher for the Pocophone, which is a popular (and inexpensive) smartphone. It’s actually available for most Android smartphones, which is surprising given Google’s refusal to provide their own. This is a very simple launcher. It offers a stock Android-like interface with home screen icons and a swipe-to-access app drawer. You can change the background of the app drawer and the grid on the home screen. It also features a privacy setting that allows you to hide icons from the app drawer if desired.
Aside from that, it’s light and easy to use. It’s a straightforward recommendation for individuals with lower-end smartphones and those who want something truly simple on their higher-end devices.

Rootless Launcher is a good stock Android launcher that was released in 2018. It’s a really straightforward experience. To complete the design, you get a full Android look and feel with some additional personalization components. Icon pack support, adaptive icon pack support, an icon shape selection, themes depending on your wallpaper, and the ability to move the search bar are just a few of the features. You may also use Google Feed with this launcher, although it, like most others, requires the download and installation of an additional plug-in.
In the Google Play description, there is a link to a website with instructions. For stock Android lovers, this is right up there with Hyperion and Lawnchair as an excellent option.

Smart Launcher 5 is a significant improvement over Smart Launcher 3. Fortunately, it’s going in the right way. It has a modern UI, ambient theming features, adaptive icons, and other modern features. It also comes with a weather and clock widget, as well as gesture controls.
It doesn’t have the same punch as Nova Launcher or similar launchers. It does, however, have enough features to be enjoyable. When it comes to customization and usability, it seems to compete directly with Action Launcher and similar apps. 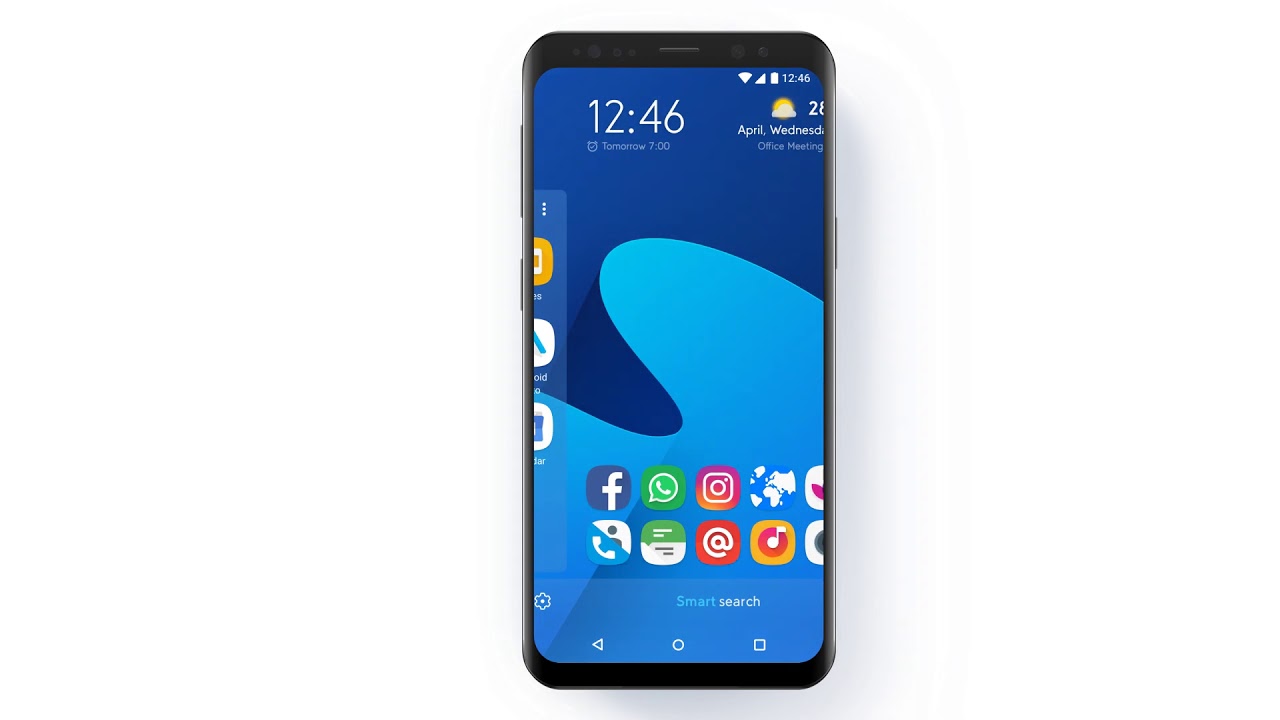 On this list, Total Launcher isn’t the most popular launcher. It is, nevertheless, still fairly good.
It has a high level of customization, as well as a variety of themes and other features. It does, however, have a steeper learning curve than most. Those who stick around and learn what they’re doing are given a very unique experience. Those looking for something basic that works well should look into CPL, Rootless Launcher, Hyperion Launcher, or one of the other possibilities.