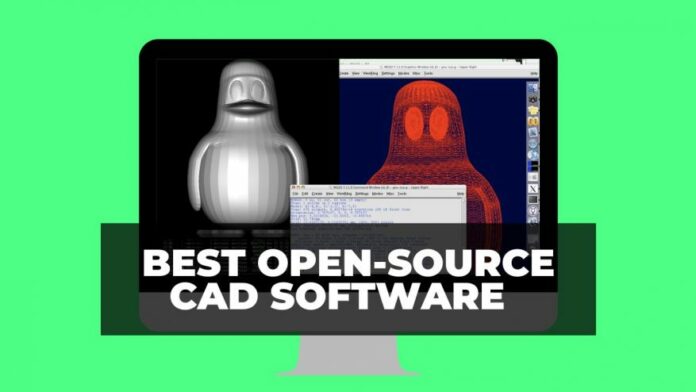 The increasing need clearly shows that the design generation is anticipating something fantastic after 2D and 3D design technologies, and Computer-Aided Design techniques appear to be enormously supporting to fill this gap.

The parts that follow will go into detail on CAD and its impact on product design and manufacturing, as well as how different industries might benefit from this technology. In addition, the post will walk you through some of the top free and open source CAD software applications.

Every stage of the product development lifecycle has a deadline for completion. In this competitively developing sector, this pressure is enormous. Every day, new items enter the market, rendering older ones outdated. Certain items, such as aircrafts and automobiles, have lengthy development lifecycles.

Drawing and matching by hand becomes tiresome and time-consuming. With various types of items, technological obsolescence becomes the primary factor. Using computer systems, on the other hand, reduces the time required for product development. As a result, designers’ major preoccupation becomes drawing and design.

Simply said, when the design and drawing are readily available during the utility, product modifications become easier to accommodate changing trends and expanding demands.
Several organisations are being forced to employ complex CAD software tools as a result of this.

How Did CAD Come About for Industrial Use?

In terms of automating the drafting process, the term CAD first appeared in the early 1960s. It was during this period when computer-modeling technology began to eclipse traditional drafting processes due to its time-saving benefits. Furthermore, computer-based models are straightforward to alter or manipulate by adjusting their parameters.

Another factor for the creation of CAD was ‘designs by simulation’ testing carried out by high tech enterprises. These industries, like as aircraft and electronics, began employing computer modelling phenomena to test their products.

The third cause for the evolution of CAD was the inclusion of numerical control technology in the ‘design to manufacturing process.’ The most significant trend in Computer-Aided Design technology is the highly tight or close integration of their production process’s design and manufacturing stages.

There are several applications for CAD software in various industries.

CAD software is widely utilised in engineering-based sectors, as well as manufacturing and industrial design processes. These high-tech industries make items that cost millions of dollars. As a result, the initial design phase is critical, for which the best CAD software is required. To develop the final product, every detail is meticulously prepared utilising this design programme. 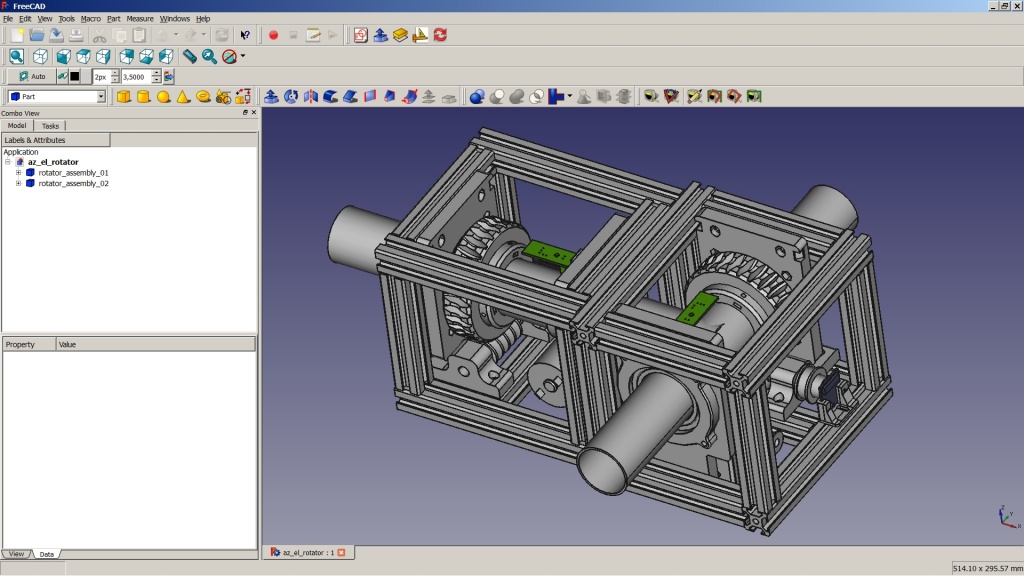 FreeCAD is a free and open source parametric 3D modeller and CAD software created by Jürgen Riegel, Werner Mayer, and Yorik van Havre. It is written in C++ and Python, runs on Linux/GNU, UNIX, Mac OS, and Windows, and is licenced under the LGPLv2+. This software’s stable version 0.17 will be released on April 6, 2018. 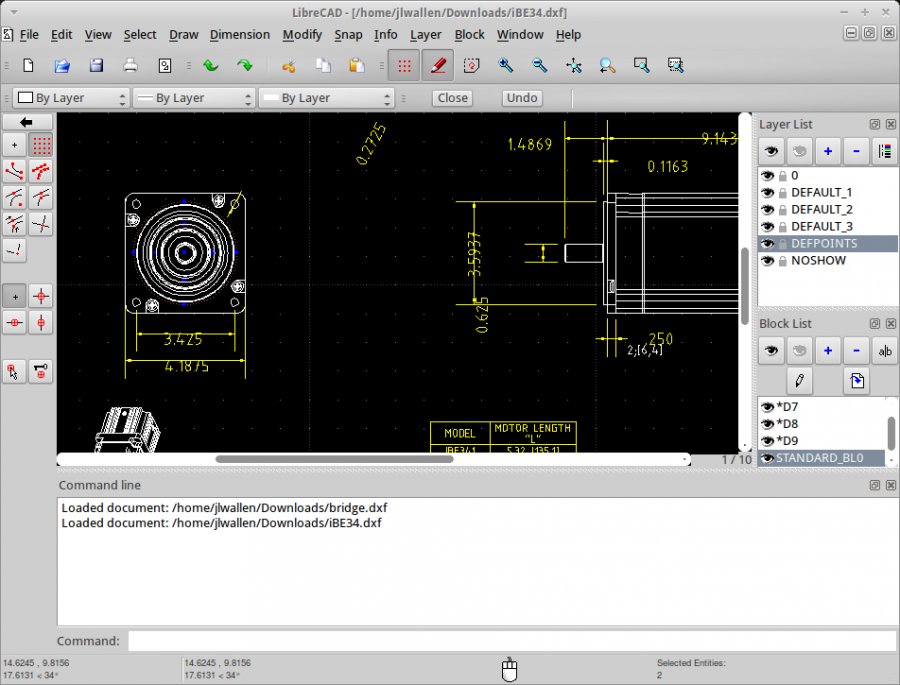 A product developed by the LibreCAD community — LibreCAD is a 2D computer-aided design application created in the C++ programming language. It runs on Linux, Mac OS, UNIX, and Windows and is released under the GPLv2 licence. This software’s stable version 2.1.3 will be released on September 23, 2016. 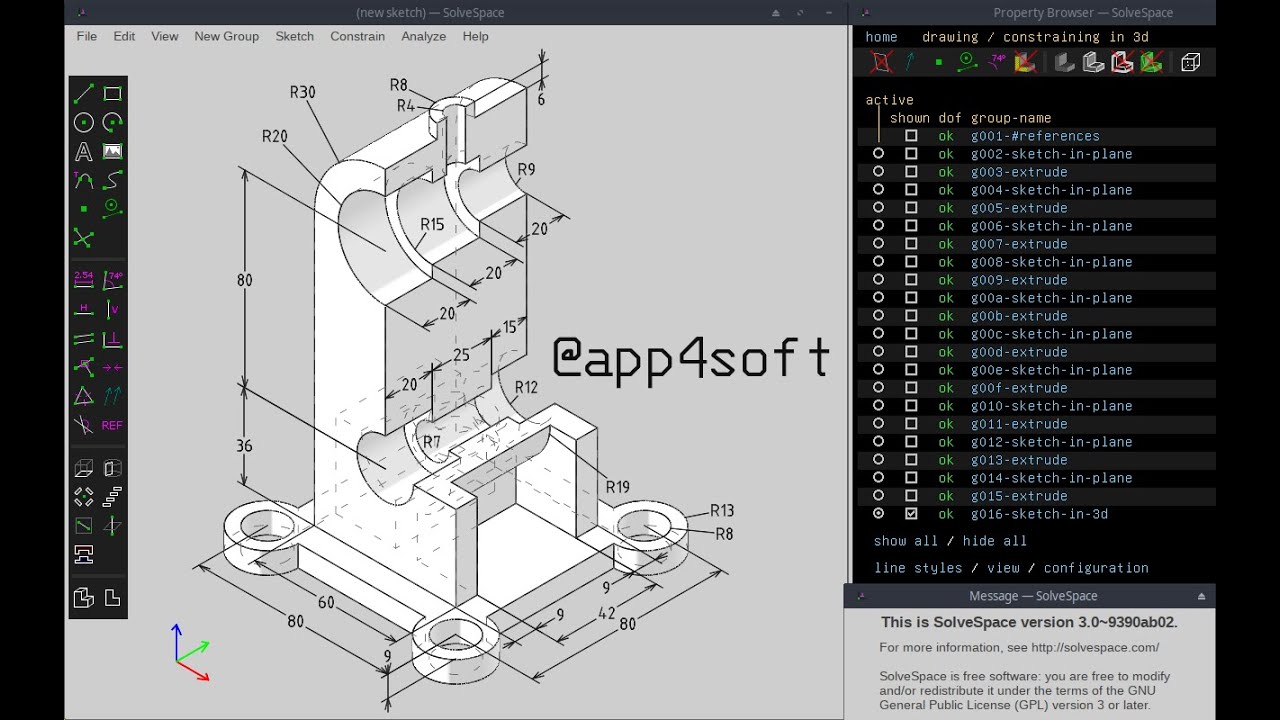 SolveSpace was created by Jonathan Westhues. It is a free, open source and libre 2D and 3D CAD (computer-aided design) tool that operates on Windows, Linux, and Mac OS. The software is written in C++ and distributed under the GNU GPL 3+ licence. This software’s stable version 2.3 will be released on December 24, 2016. 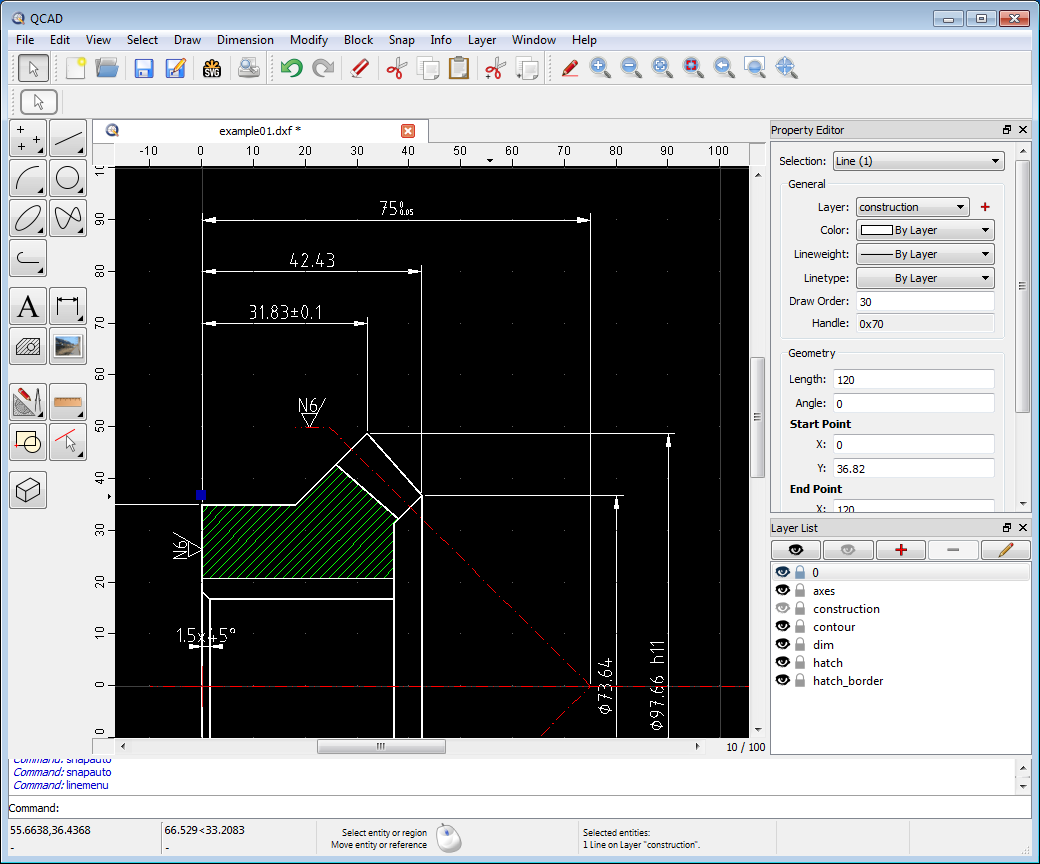 QCAD is a popular free and open source CAD software tool. RibbonSoft created it, and it is written in C++ (Qt), ECMAScript, and GPLv3 with certain commercial licence plug-ins. It runs on Linux, Mac OS, UNIX-like, and Windows, and the stable version 3.20 was released on April 12, 2018. 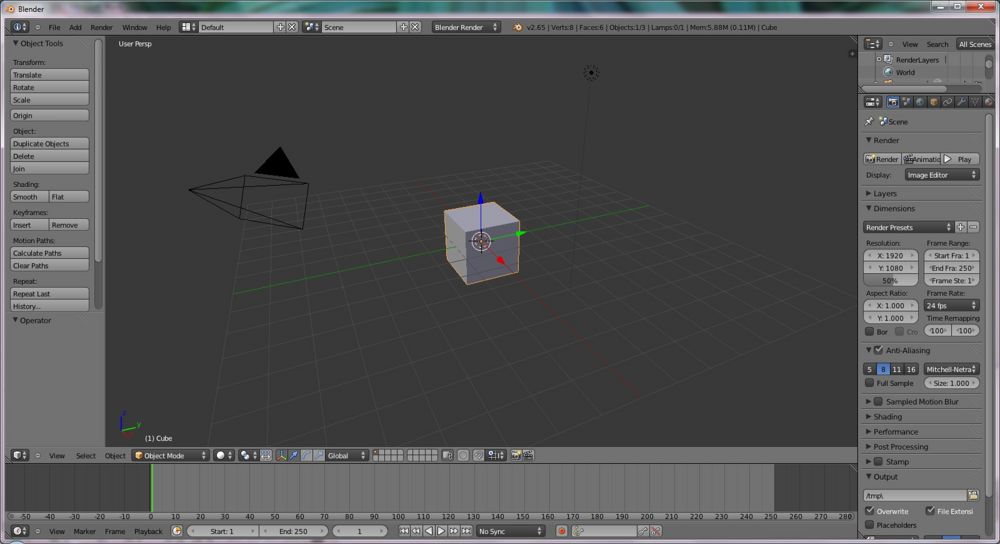 BRL-CAD is a computer-aided design software that is based on constructive solid geometry (CSG) and solid modelling. BRL-CAD was created by Mike Muuss. The code is written in C, C++, and Tcl. It runs on a variety of platforms (including BSD, Linux, Mac OS X, Solaris, and Windows) and is licenced under the BSD and LGPL licences. The software’s stable version 7.26.4 will be released in October 2017. 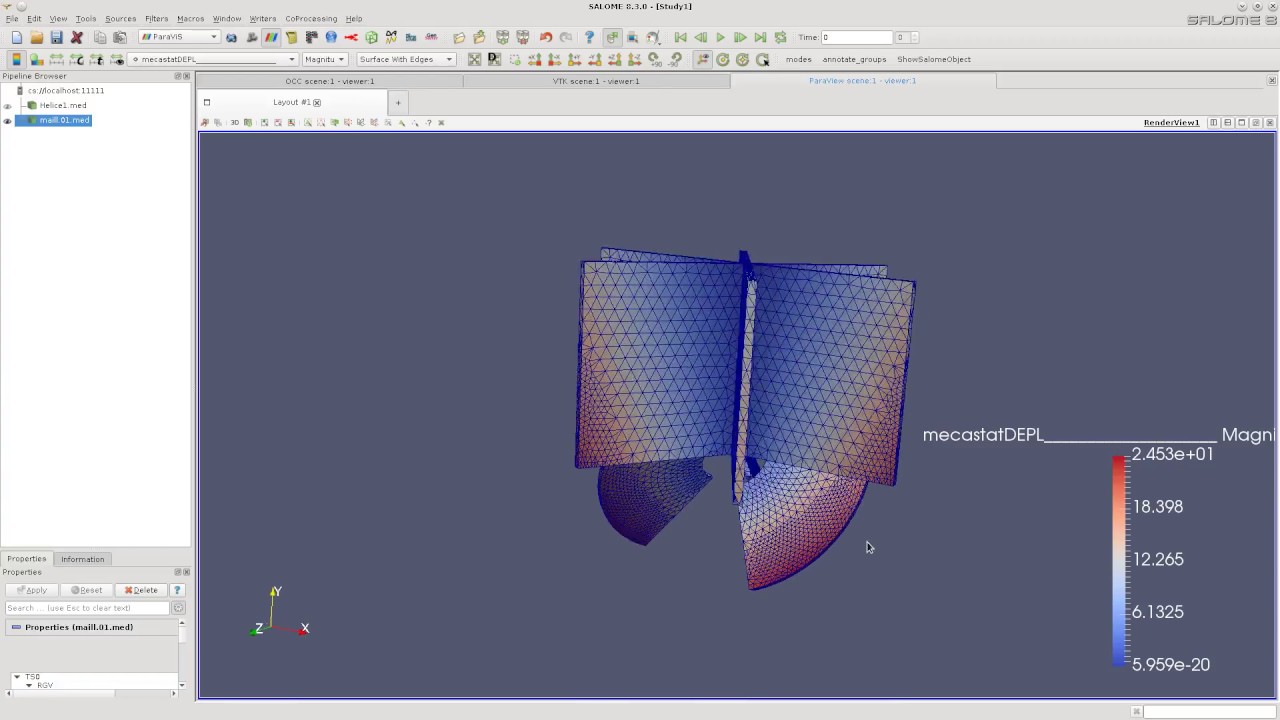 Salome is the greatest free and open source software for numerical simulation pre- and post-processing. It is written in C++ and Python, runs on Linux/Windows/Unix-like systems, and is released under the GNU Lesser General Public License. The software’s stable version 9.2.0 will be released on December 21, 2018. 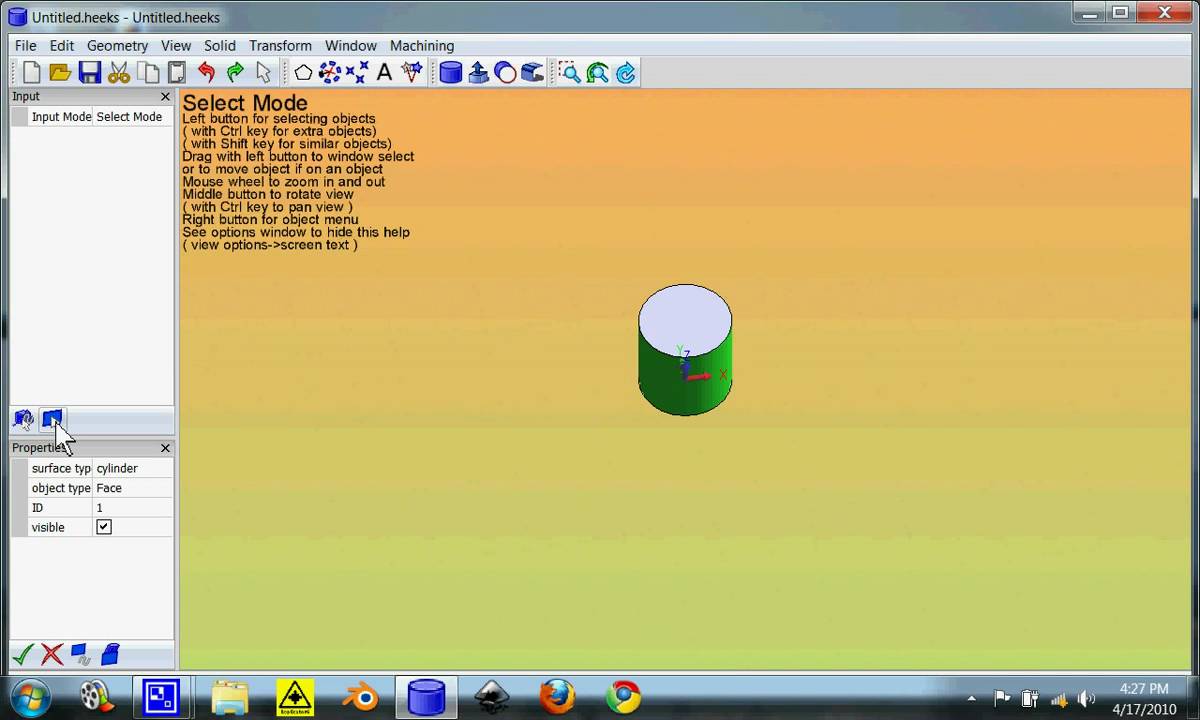 Dan Heeks created HeeksCAD, a popular free and open source 3D CAD/CAM programme.
It is written in C++, runs on Microsoft Windows, Linux, and Mac OS X, and is released under the BSD licence. The software’s stable version 0.18 will be released on May 11, 2011. 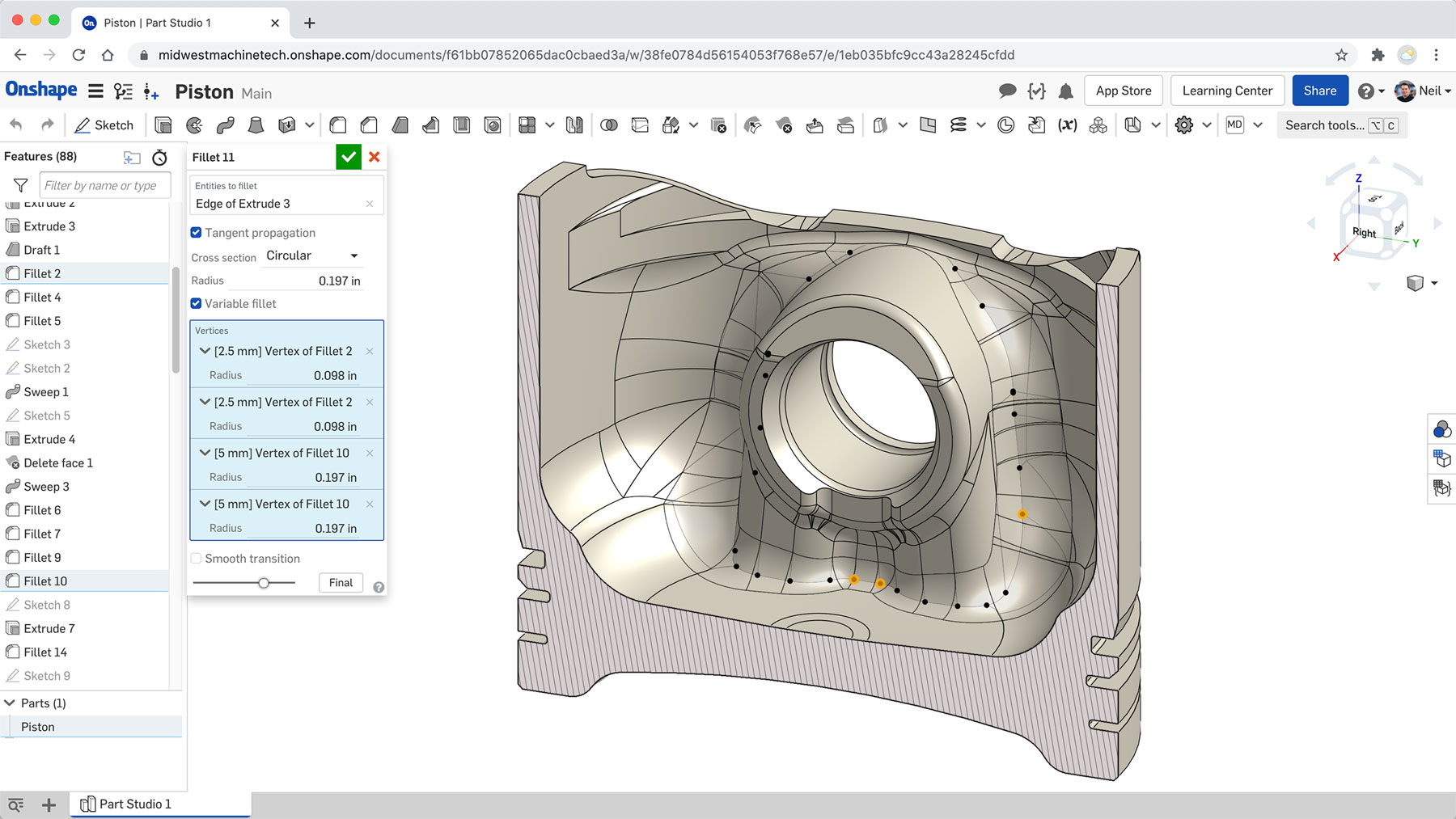 OnShape is a computer-aided design software system that is available for free. The programme is distributed via the internet using the Software as a Service (SaaS) concept.
It is available in English, German, Korean, Chinese Traditional, and Chinese Simplified languages and runs on iOS, Android OS, Microsoft Windows, Linux, and OSX platforms. OnShape introduced FeatureScript as a new open source programming language for Computer-Aided Designing in May 2016. NanoCAD is a professional CAD application used by thousands of engineers and designers worldwide. NanoCAD + includes some extra features. Both versions are available for a reasonable annual subscription fee that includes timely upgrades and priority online assistance.

The importance of design cannot be overstated, from a single product to a large manufacturing industry. When you have to demonstrate an advanced design of a product, a property, or anything else, even manual activities appear constrained. As a result, using machines and tools becomes necessary.

When it comes to winning the game of intellectual design and earning revenues from your firm, an advanced computer-aided design software tool might be your game changer.

However, choosing the finest suitable software from the vast array available on the internet is difficult. Still, with some investigation, you may find the best free and open source CAD software solution for your needs.

Free and open source software would limit your extra expenditure on the type of software you desire while also saving you from the proprietary constraints that are typically imposed by premium solutions.

How To Sell & Buy on Mercari ? Mercari Review Guide